In September 2017, Suited & Booted was delighted to be awarded a Points of Light Award.

Suited & Booted is now featured on in the film ‘Amazing Humans’

Thank you to all our wonderful volunteers and supporters who make our work possible. 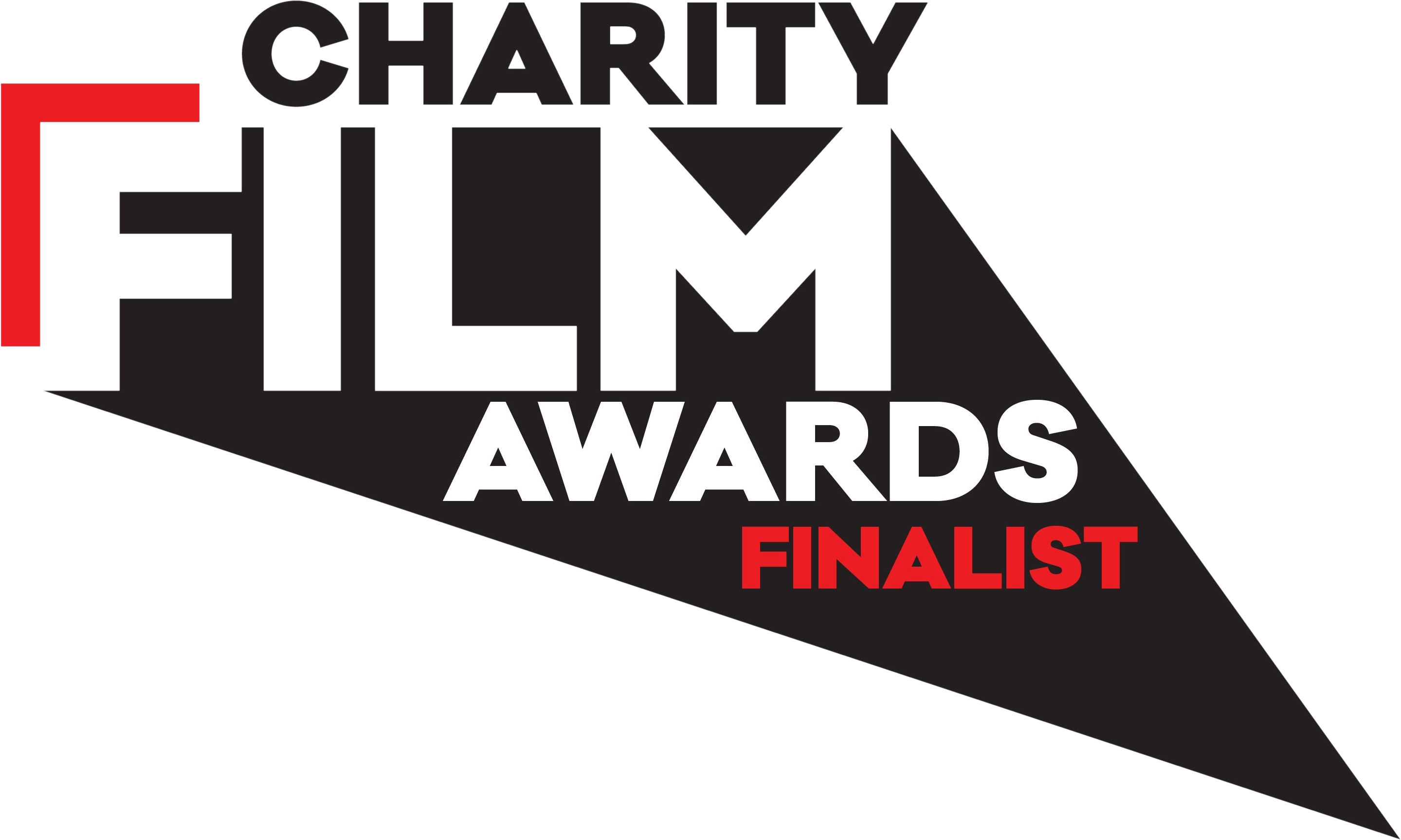 S&B had a wonderful evening at the Charity Film Awards held at BAFTA on 15 March.

Over 375 charities entered the awards, which was whittled down by 65,000 members of the public and the judges. We are delighted to be Finalists. 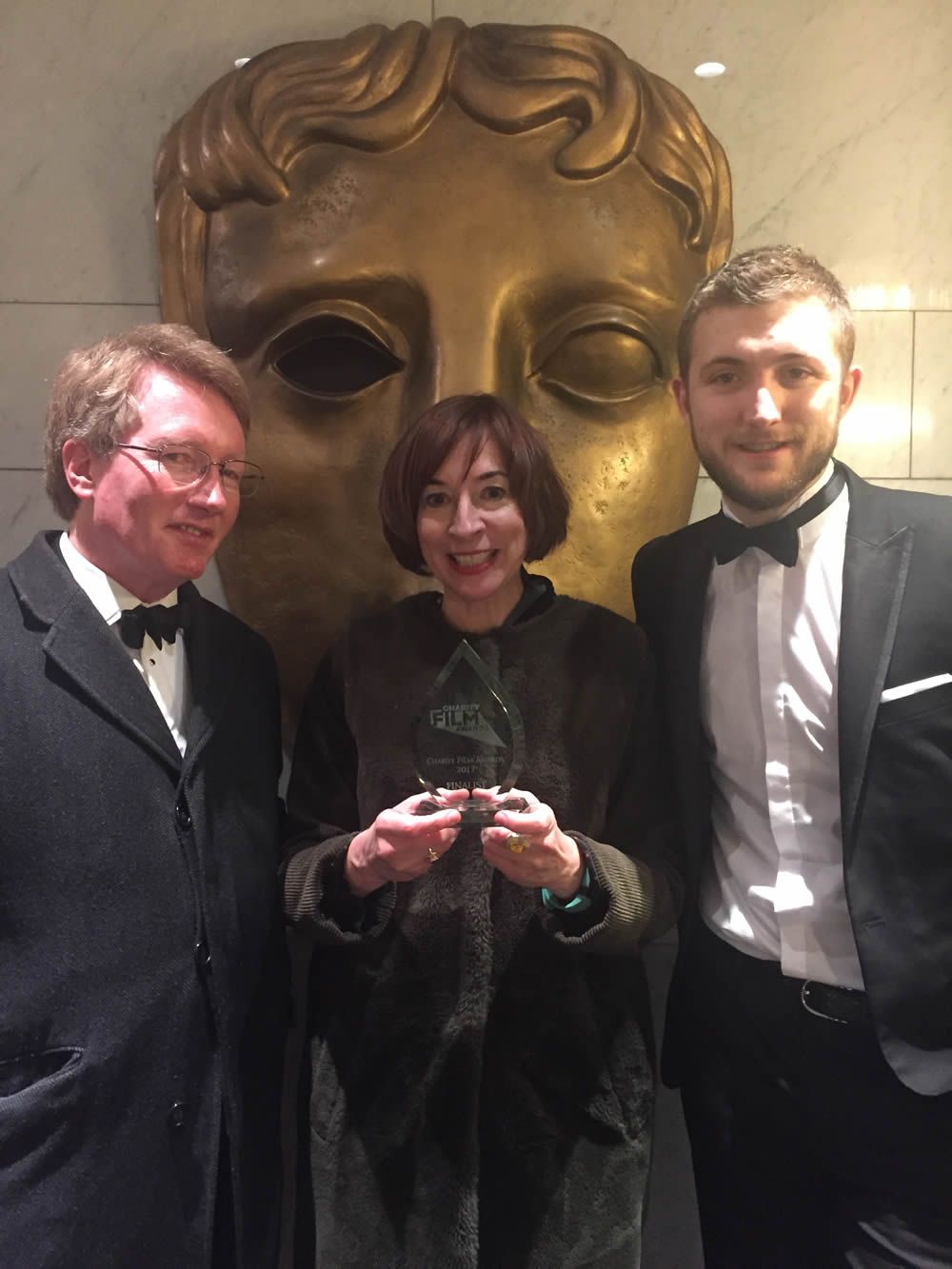 Here they are with their Finalist Award. On  the right is Ben Tynegate who made the video with Dr Maria Lenn, Chief Executive and Angus Murray, Chair.

With our host, Sally Phillips 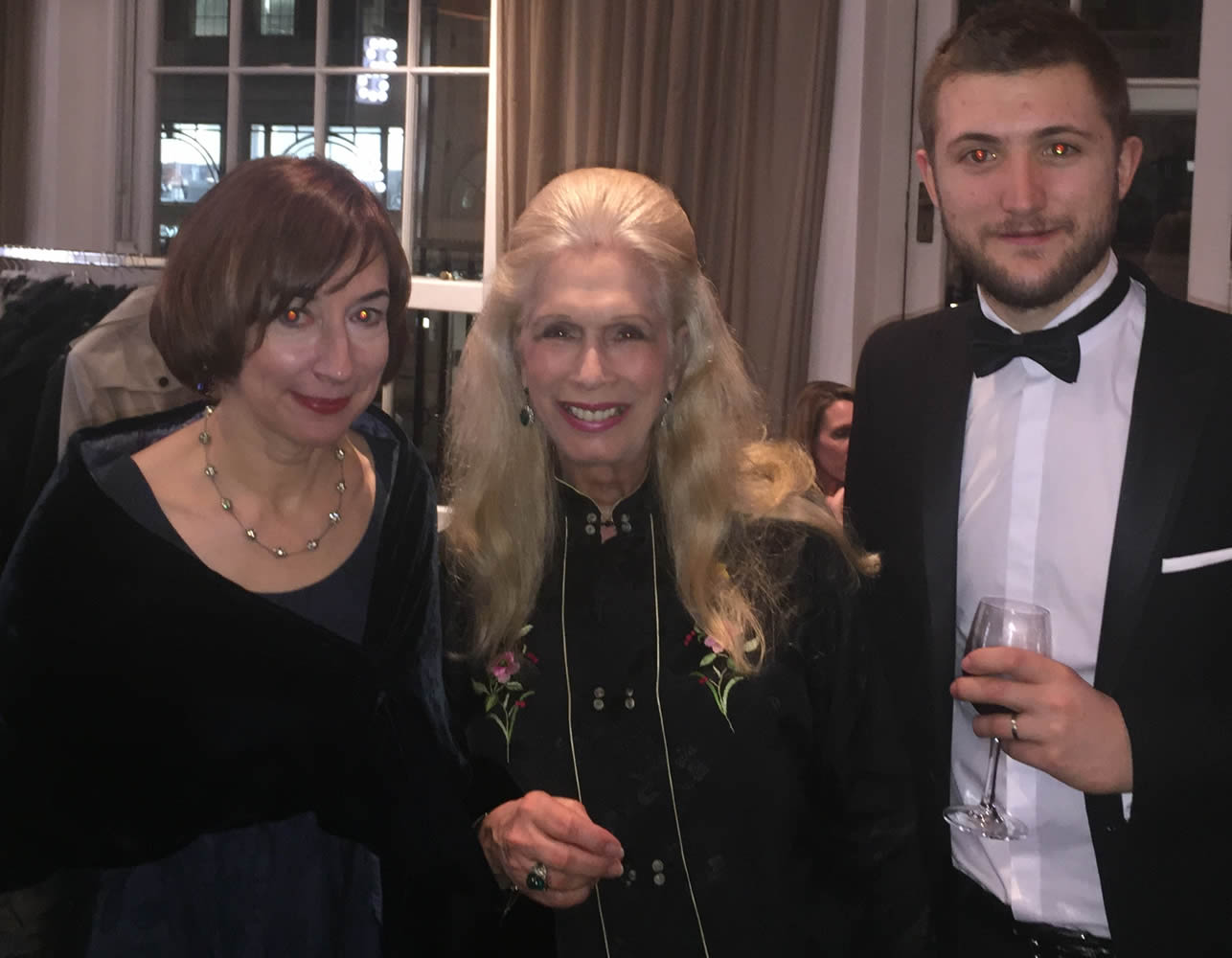 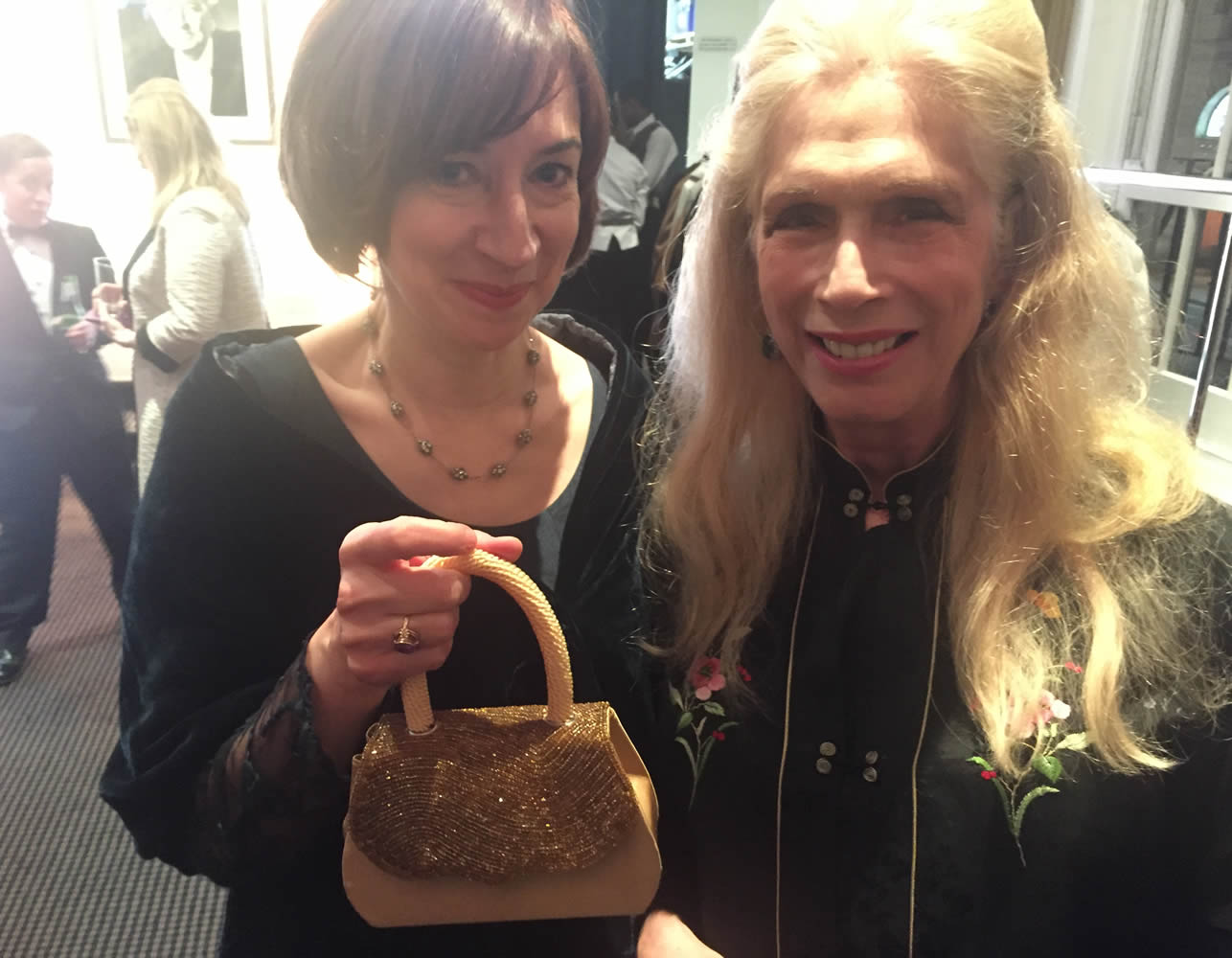 With Lady Colin Campbell and her tiny handbag.
She let Maria hold it for the photo.

We all had a wonderful time at our 29 March wine-tasting event  at the Members’ Club, Guildhall.

Dr Gerald Sacks, Chancellor of La Jurade de St Émilion, presided over the event and engaged the audience with his interesting narrative on the wines and people of St Emilion. We would like to thank Dr Sacks and the Jurade for generously donating the wines and here are some photos from the event.

Our wonderful client, Stephen, wanted to show the audience the difference that a suit makes. Here he is before and after his ‘transformation’. Thank you Stephen. 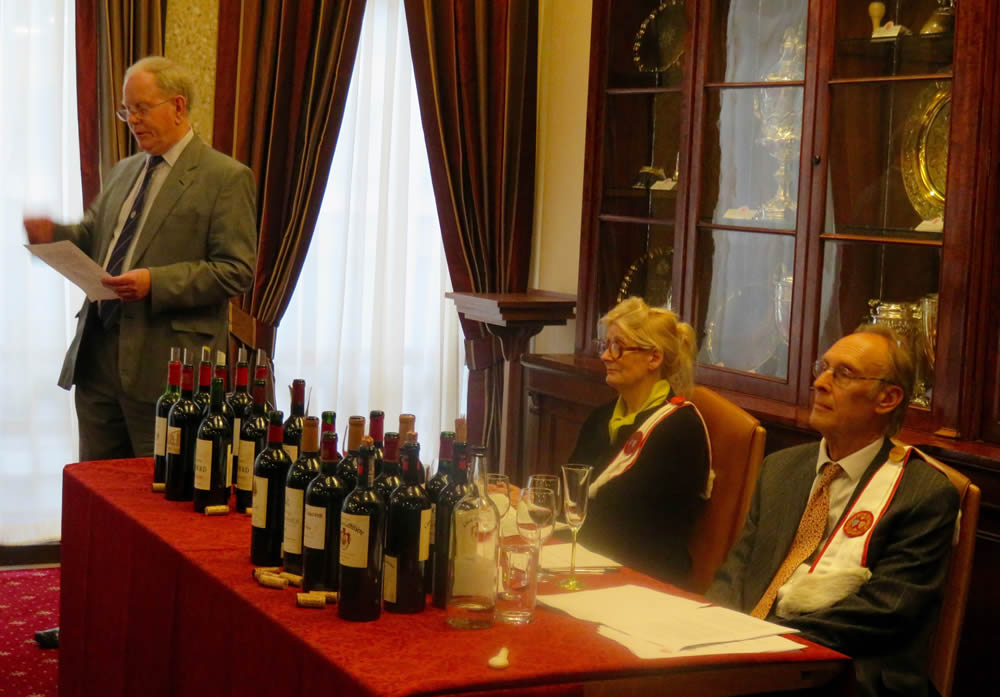 Mike Thomas, a Suited & Booted supporter from the Worshipful Company of Actuaries, introduces the wine-tasting event. 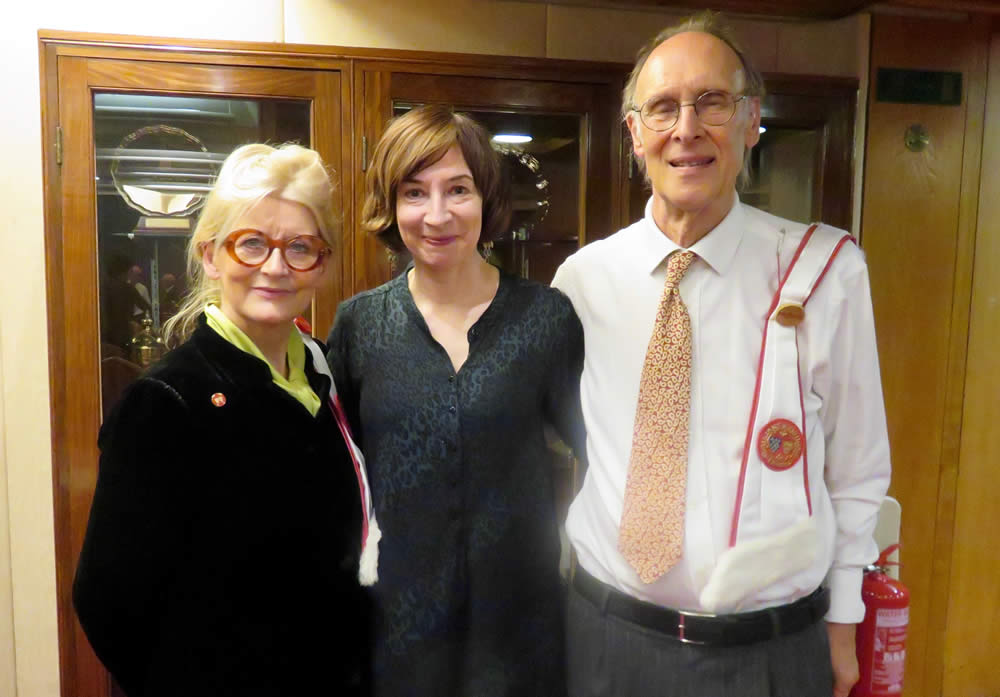 Dr Gerald Sacks and Ita Sacks, with Maria in middle. 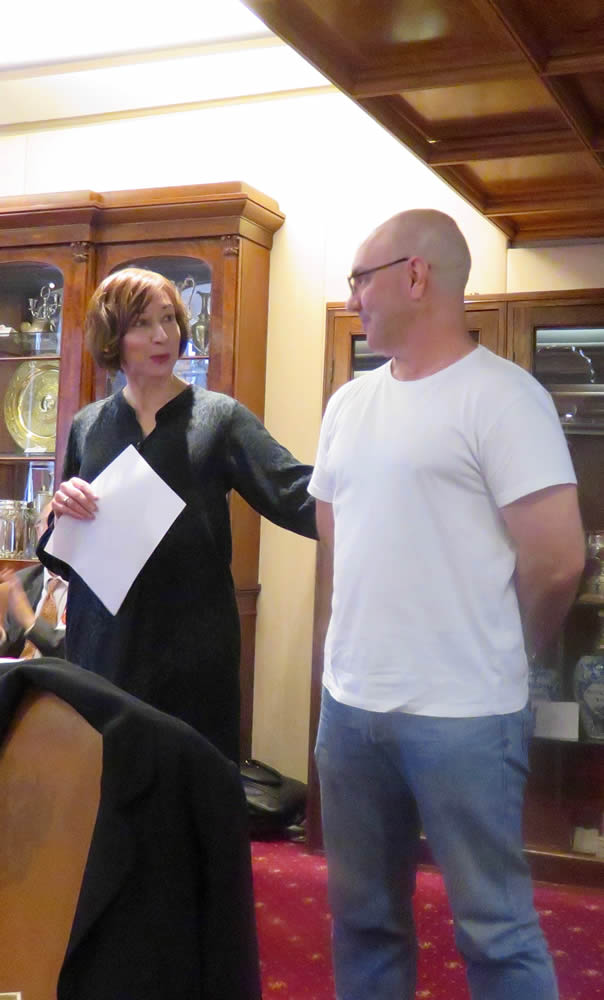 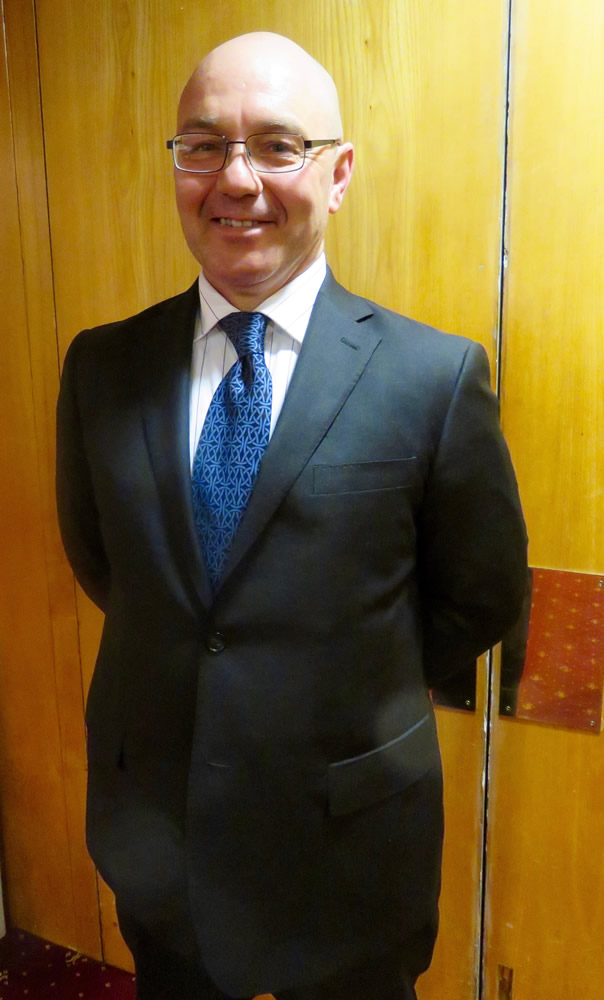 Suited & Booted: How one recycled suit can transform a man’s life. 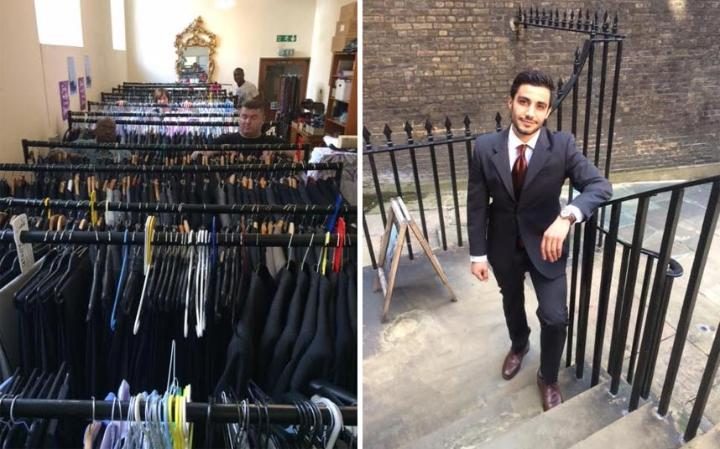 A Night with the Suited & Booted Charity

Many thanks to everyone who contributed in making our 25 January fundraising event such a great success! 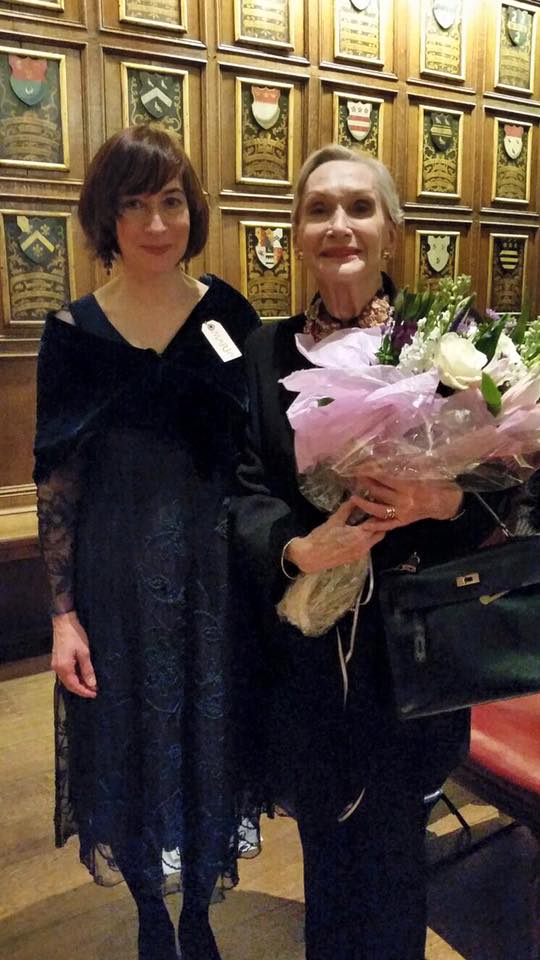 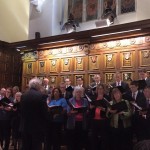 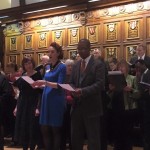 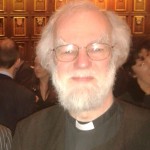 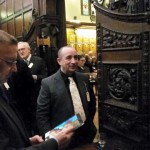 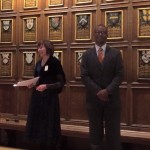 Suited & Booted with David Frederick at the Redemption & Justice Awards 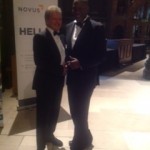 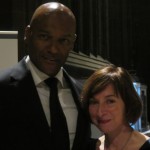 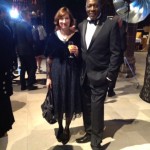 The Redemption & Justice Awards, organised at Manchester Cathedral by NoOffence! CIC, were created to salute people who have succeeded in turning their lives around, after a journey of redemption through the justice system. Suited & Booted nominated David Frederick, and he was selected as a finalist in the Inspirational Award category. 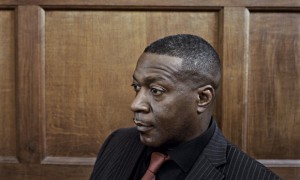 Freddie: ‘I was caught in a circle that I couldn’t break: prison, release, no hope of a job, then the inevitable reoffending.’
Photograph: Amber Rowlands

Tucked away off busy Queen Victoria Street in London’s Blackfriars, St Andrew-by-the- Wardrobe is easy to miss. As the church’s website puts it: “Like a well-bred lady fallen on hard  times, the church waits with quiet dignity for someone to stop and pass the time of day.” Designed by Christopher Wren, but burnt down in the Great Fire of London then badly damaged  during the blitz, it is a beautifully austere building bordered on one side by the wonderfully named Wardrobe Terrace.

Outside, an unlikely sign beckons passers-by. It is not, surprisingly, an invitation to view the church’s oak and limestone memorial to William Shakespeare, who worked close by for a  time, but to visit the bustling HQ of an organisation called Suited & Booted. On a cold, drizzly January morning, I do just that and find myself sitting in a room full of rows of  neatly pressed suits alongside a quiet young man who has just been measured up and is awaiting the arrival of his new clobber – a suit, shirt, tie and shoes, maybe even a pair of
cufflinks and a pocket handkerchief. Around us, cheery volunteers are busy steaming, ironing and measuring. When one of them finally arrives with the quiet young man’s clothes, encased  in a designer suit holder, the recipient is momentarily lost for words. “Thank you,” he says finally, looking at the floor. “It’s really great that people like you exist.”

Veteran American essayist and dandy Gay Talese once wrote: “Putting on a beautifully designed suit elevates my spirit, extols my sense of self and helps define me as a man to whom  details matter.” It is to this principle that Suited & Booted adheres, albeit in its own singular way. As founder Maria Lenn explains as she guides me through the church: “Suited &  Booted is based on a simple, but potentially transformative idea. Put simply, it gives vulnerable men a realistic chance to start over by fitting them out with a smart suit, shirt, tie and shoes so that they can attend job interviews looking the part.”

Maria is a quietly intense woman with a PhD in politics who has swapped academia for charity to assuage what she calls her “entrepreneurial spirit”. The suits come mainly from City firms collecting their employees’ unwanted clothes, while some are unclaimed stock from bespoke tailors and others are donations from clothing companies. They are not your regular charity shop stock: a quick perusal revealed a sharply cut, dark-blue two-piece by Cartier hanging alongside a grey wool Yves Saint Laurent number. 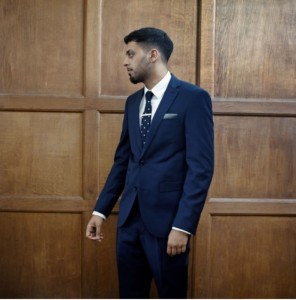 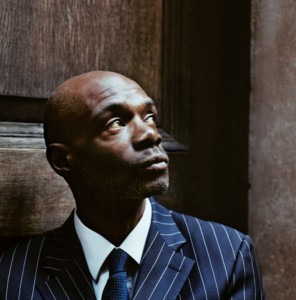 London-based photographer Amber Rowlands heard about Suited & Booted though a style-conscious friend who regularly drops his old suits off at St Andrews by the Wardrobe. “I was looking for a project for my MA course and I’ve always had a fascination with the hidden parts of London. The project also chimed with my experience in a way, because, like many people, I know a few individuals who have fallen into trouble through alcohol or drugs and have found it hard to fit back into society.”

Rowlands’s portraits manage to capture the mixture of hope and vulnerability that attends a project such as Suited & Booted. There is a certain melancholy in many of the images, in which the smart young men stare away from her camera or, in one instance, turn away from it altogether. These are vulnerable people at a crossroads in their life, sometimes not for the first time. The following day, I speak to Freddie, one of her subjects and very much a Suited & Booted success story. Now in his 50s, he describes himself as “a reformed repeat  offender”with “a colourful past”, the specifics of which he refuses to go into.

“Let’s just say I was at it for a good few years. Too long. I was born in the 1960s and grew up in Harlesden and Ladbroke Grove. It was different back then. Young black guys were  marginalised and often criminalised. I was arrested for the first time under the Sus laws [which enabled the police to stop, search and arrest an individual they deemed suspicious] and it just went on from there.”

Until recently, Freddie describes himself as being “caught in a circle that I couldn’t break: prison, release, no hope of a job, then the inevitable re offending. That’s how it went for  a long time until I was referred to Maria and Suited & Booted.” Freddie, who describes Maria as his “mentor”, is now managing director of his own company, The Reformed Foundation,  which supports ex-offenders through training and support in finding employment. “We have contracts though SeeTec [one of Britain’s biggest employment and training specialists] in  Stratford, Lewisham and Walthamstow. I can pass on my knowledge,” he says, proudly, “and hopefully help people break the patterns of negative behaviour that lead to repeat offending.” 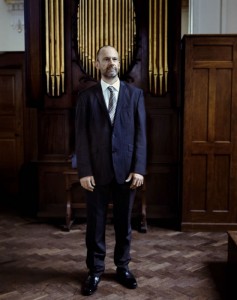 Around 2,000 vulnerable men passed through the fitting rooms of Suited & Booted last year, many of them ex-prisoners, but also recovering alcoholics, long-term unemployed, those  grappling with mental health issues and ex-military men who have found it difficult to adapt to civilian life. “A new suit,” says Maria, “can, hopefully, equal a new start.”

Amber agrees: “Even though Suited & Booted is a secular project, there is something redemptive about the setting in St Andrews. For me, it was really about the idea of personal transformation that a new suit symbolises.”

I asked Freddie if he feels the same way. “I do,” he says, after giving it some thought. “I mean, I was a guy who had issues about wearing secondhand clothes or charity shop clothes. It was a pride thing, but Suited & Booted was not what I thought it would be. For a start, you can pick and choose what you want to wear. It’s about the clothes you like, not what they  like. And it’s also about the decisions you can make about yourself if you feel confident. A good suit can give you that confidence. It can make you feel like a million dollars even if  you’ve just come out of prison.” Suited & Booted needs volunteers with specialist experience: stylists, alteration tailors etc. Info 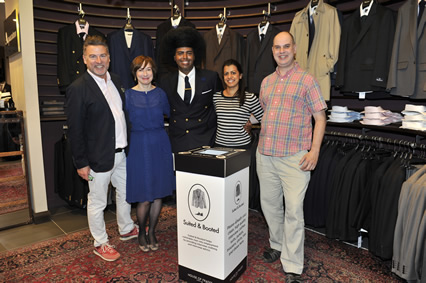 Prince Cassius (middle) with (left to right) Ross Kelly, Dr Maria Lenn, Dinal Limbachia and John Nyerges at the launch of the House of Fraser campaign for Suited & Booted.

Please support our campaign with House of Fraser. Donate your unwanted suit and get £100 off a new one. Thanks to House of Fraser and Berwin & Berwin for supporting our charity in this wonderful initiative. Please click here for details 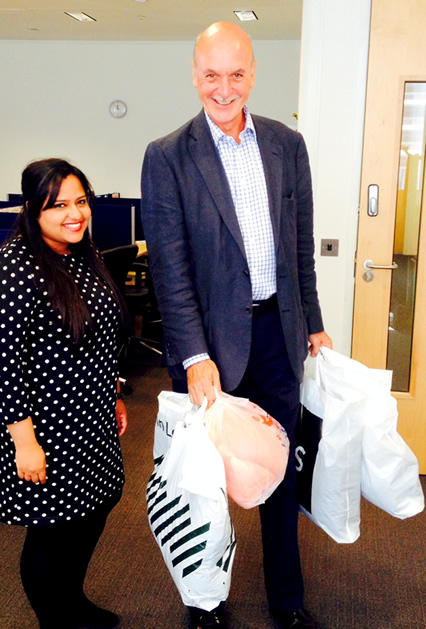 Reshmi Sarkar, CSR Lead, MphasiS UK, Europe and USA -  “MphasiS as part of its CSR activities in the UK is committed to making a difference to the local community by supporting education and employability activities; especially supporting long term unemployed back into work. MphasiS employees have thoroughly enjoyed supporting the Suit Drive. Going forward, Mphasis will be keen to support the Suited & Booted journey in the long term…” 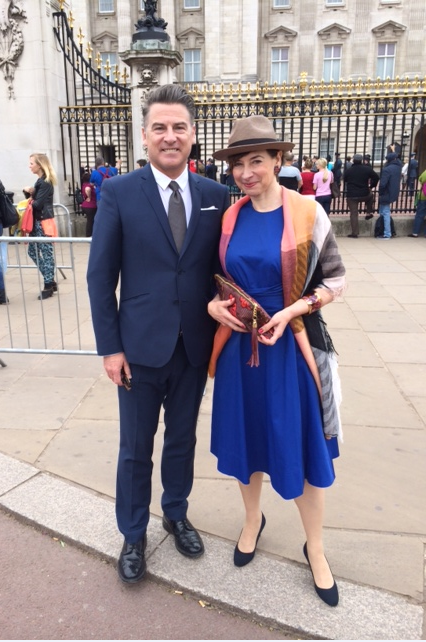 In recognition of Suited & Booted’s work, Dr Maria Lenn was invited to a Royal Garden Party at Buckingham Palace on Wednesday 21st May. Maria invited as her companion our volunteer Ross Kelly, and here they are, outside the Palace, getting ready to go in.